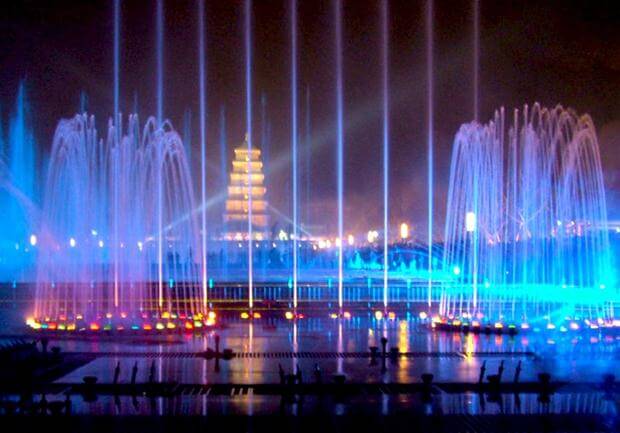 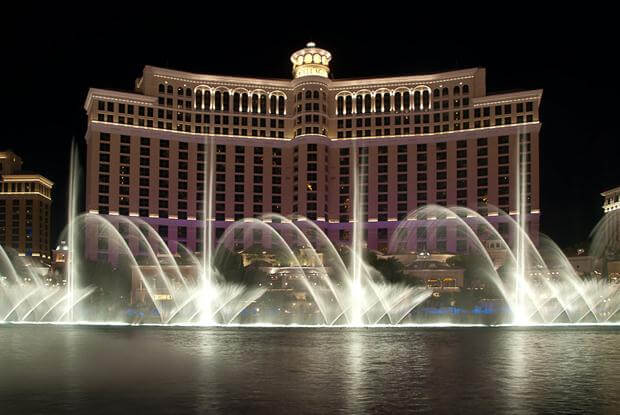 The Fountains of the Bellagio Hotel in Las Vegas (USA) are a vast, choreographed water fountains with performances set to light and music. The performances are visible from numerous vantage points on the Strip, both from the street and from neighboring structures. The fountain’s show takes place every 30 minutes in the afternoons and early evenings, and every 15 minutes from 8 PM to midnight. The Fountains are set in a nine-acre man-made lake. The fountain display is choreographed to various pieces of music; current pieces include “Fly Me To The Moon” (Frank Sinatra), “Time to Say Goodbye” (Sarah Brightman and Andrea Bocelli) and “My Heart Will Go On” (Celine Dion).

Contrary to a common urban myth that the lake is filled with treated greywater from the hotel, it is actually serviced by a fresh water well, that was drilled decades prior to irrigate a golf course which previously utilized the site. In fact, the fountains use less water at present than under its prior golf course use. They incorporate a network of underwater pipes with over 1,200 nozzles that makes it possible to stage fountain displays coordinated with over 4,500 lights. It is estimated that the fountains cost US$50 million to build. 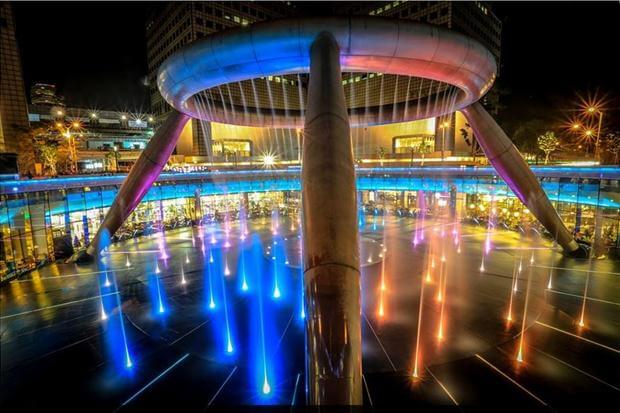 The Fountain of Wealth is located underground within the largest shopping mall of Suntec City in Singapore and is famous for being the world’s largest fountain. A symbol of wealth and life, the Fountain’s design was based on the Hindu mandala, and is a symbolic representation of the oneness in spirit, unity and harmony among the four races in Singapore. The fountain is made of bronze, and consists of a circular ring with a circumference of 66 metres supported on four large slanted columns. It occupies an area of 1683 metres (5521 ft), with a height of 13.8m (45.2 ft). Water from the fountain shoots up to 30 metres high. 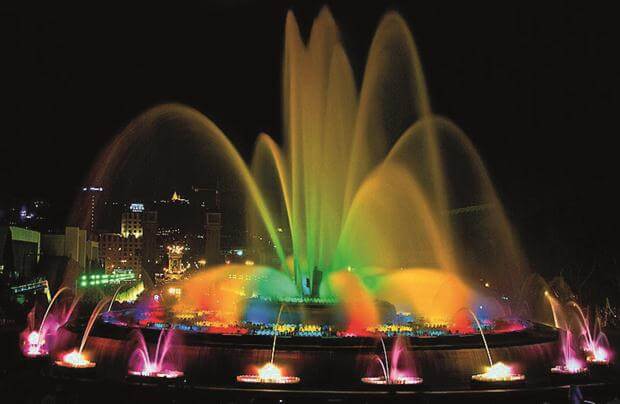 Magic Fountain of Montjuic (Barcelona): A spectacular display of colour, light and motion

The Magic Fountain of Montjuic is a spectacular display of colour, light, motion, music and water acrobatics in Barcelona. Located between Placa d’Espanya and the National Palau, the magic fountain attracts thousands of tourists every night. Built by designer Carles Buigas in 1929 for the Great Universal Exhibition, over 3000 workers were commissioned to work on the project for less than a year.

Sadly, on 2004 the Volcano Fountain –once an scenic landmark of Abu Dhabi and one of the world’s most beautiful fountains– was demolished to make space for a more picturesque development of the neighborhood. The 80-foot-high fountain was built like a circular pyramid, with a flight of steps from the four sides going up the six platforms to the fountain on the top. On the evenings, the fountain would turn into a pleasant spectacle with coloured lights on as the water cascades down.

Originally built in 652 during the reign of Emperor Gaozong of the Tang Dynasty, the Big Wild Goose Pagoda is a well-preserved ancient building and a holy place for Buddhists. Located in the southern suburb of Xian City (China), the fountain is home to the largest musical fountain in Asia, with the longest light-belt in the world.

The People’s Friendship Fountain (also known as Friendship of Nations) on Moscow features 16 gilded statues of maidens in their national costumes, representing all the Soviet Union Republics. The fountain is framed by an octahedral bowl of red granite with a surface area of 4,000 square meters. The fountain is serviced by a complex system of eight powerful pumps that can shoot 1,200 liters of water from 800 jets to the height of 24 meters per second. 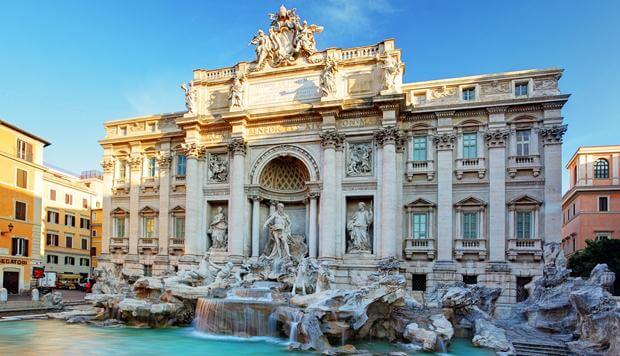 Standing 25.9 meters (85 feet) high and 19.8 meters (65 feet) wide, the Trevi Fountain (Fontana di Trevi) features one of Italy’s most beautiful sculptures: Neptune or Oceanus in the middle and two tritons, one trying to tame a fiery horse symbolizing the rough sea, and one blowing a shell-horn symbolizing the quiet sea. It was ordered in 1732 by Clemens XII and thirty years later his predecessor Clemens XIII christened it.

Trevi became famous for a scene in Fellini’s movie “La Dolce Vita”, when Anita Ekberg takes a late-night bath in the fountain. There’s also a legend saying that, if you throw a coin into the Trevi Fountain, you will return to Rome. 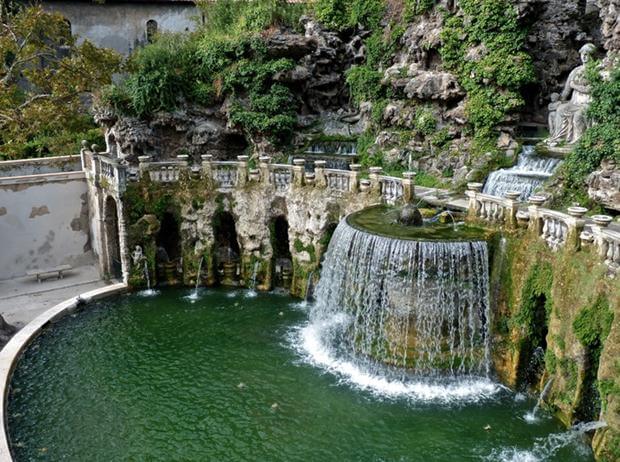 The Fontana dell’Ovato (Oval Fountain), also called Fontana di Tivoli, is located in Villa d’Este, Tivoli, Italy. The fountain cascades from its egg-shaped basin into a pool set against a rustic nymphaeum. The design was made by Pirro Ligorio. The whole Villa was declared a UNESCO world heritage site in 2001. 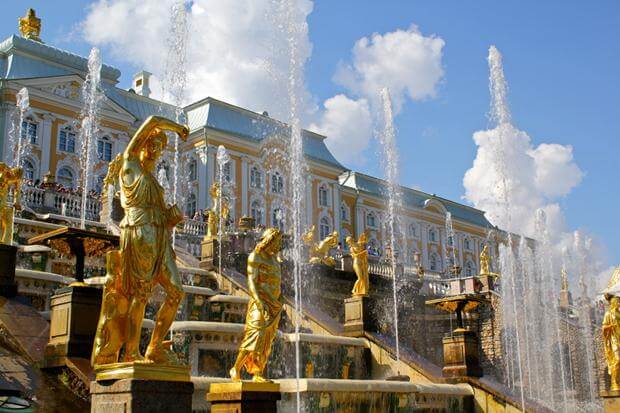 Peterhof is an immensely luxurious and beautifully preserved Imperial estate, founded in 1710 by Peter the Great on the shore of the Gulf of Finland (Baltic Sea). It combines several ornate palaces, a number of beautifully landscaped parks and a dazzling array of magnificent statues and fountains, lending it the epithet “The Russian Versailles”. The Grand Cascade flows spectacularly from beneath the palace towards the Baltic Sea and is one of the largest fountain ensembles in the world. From the Grand Cascade’s largest fountain, decorated with a magnificent gold statue of Samson battling with the lion, a channel flows through the park to the pier, where hydrofoils and boats from St. Petersburg dock.

Located in the city of Jeddah, Saudi Arabia, the King Fahd’s Fountain is famous for being the highest fountain in the world, throwing water up to 1023-ft (312m) –that’s taller than the Eiffel Tower if you exclude the antenna. It uses 3 massive pumps that can deliver 625 litres of water per second at an amazing speed of 233 mph (375 km/h). Traveling to Jeddah, don’t forget to pay it a visit, it’s incredible.