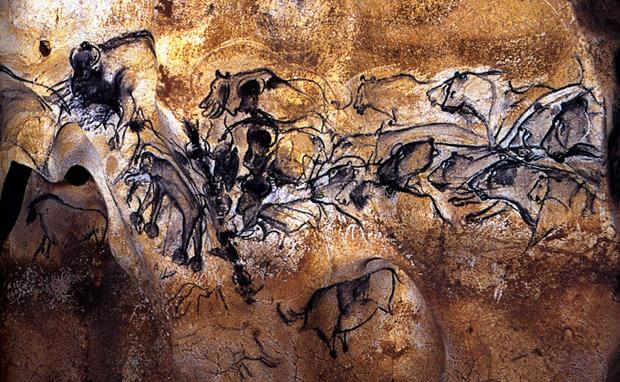 These prehistoric cave paintings from around the world are considered to be one of the greatest pieces of art ever created. These cave paintings are created tens of thousands of years ago, and they all give insights about the thoughts of the people who created them.

Here are the 10 amazing prehistoric cave paintings around the world according to touropia.com. 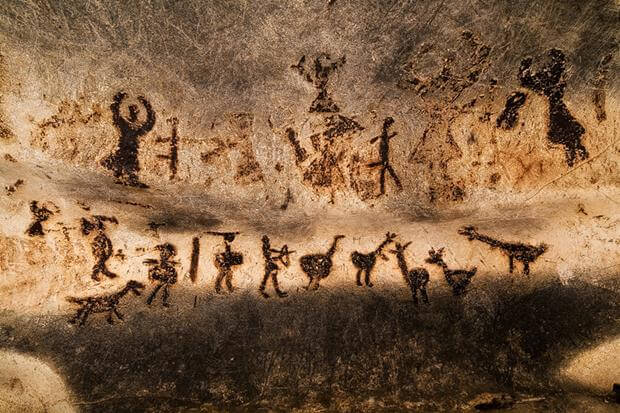 The Magura Cave is one of the largest caves in Bulgaria located in the northwest part of the country. The cave walls are decorated by prehistoric cave paintings dating back about 8000 to 4000 years ago. More than 700 drawings have been discovered on the cave walls. They are painted with bat guano (bat excrement) and represent hunting and dancing people as well as a large variety of animals. 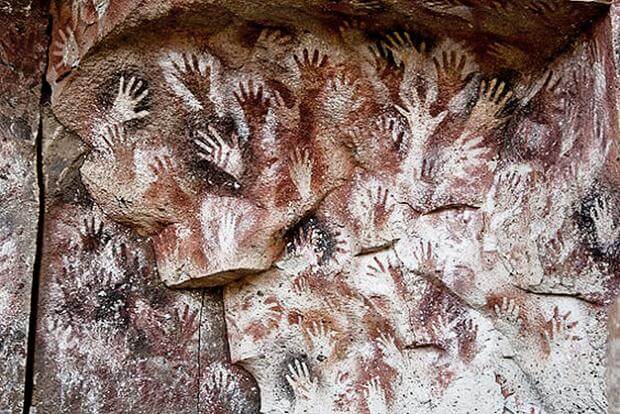 Cueva de las Manos is a cave located in an isolated area in the Patagonian landscape of southern Argentina. It takes its name (Cave of the Hands) from the stencilled outlines of human hands, but there are also many depictions of guanacos, rheas and other animals, as well as hunting scenes. Most of the hands are left hands, which suggests that painters held a spraying pipe with their right hand. The paintings are thought to have been created between 13,000 and 9,500 years ago. 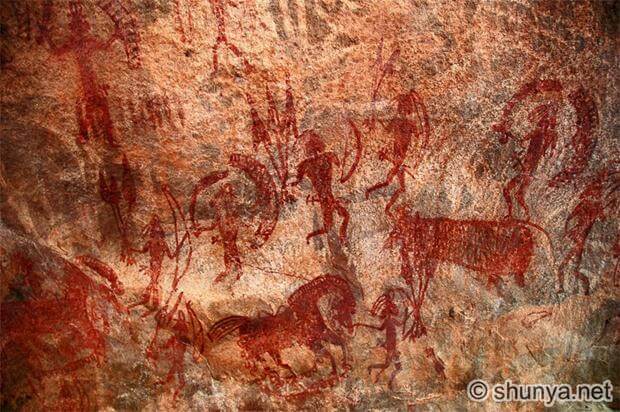 Located in central India, Bhimbetka contains over 600 rock shelters decorated with prehistoric cave paintings. Executed mainly in red and white with the occasional use of green and yellow the paintings usually depict the lives and times of the people who lived in the caves. Animals such as bisons, tigers, lions, and crocodiles have also been abundantly depicted in some caves. The oldest paintings are considered to be 12,000 years old. 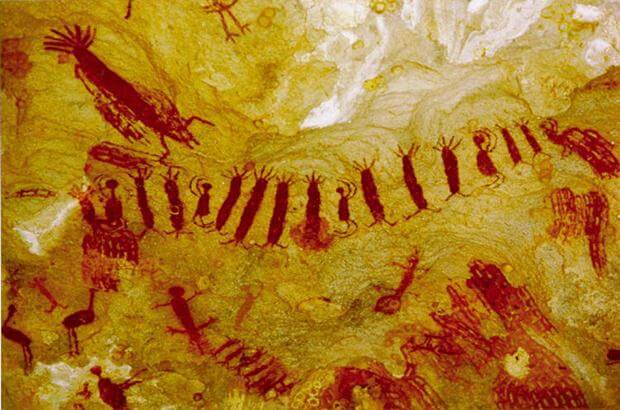 The Serra da Capivara National Park in northeast Brazil is home to numerous rock shelters that are decorated with cave paintings. The paintings include scenes of rituals and hunting, trees and animals capivaras. Some scientists believe that the oldest cave paintings in the park are created 25,000 years ago. This is disputed by several geneticists however as this would conflict the currently accepted date of human settlement in the Americas. 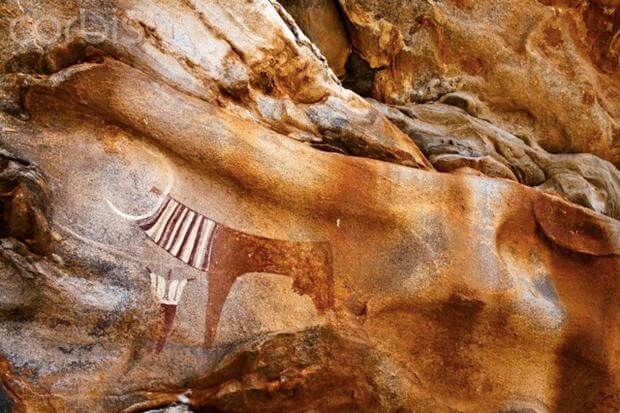 Laas Gaal is a complex of caves and rock shelters in northwestern Somalia that contain some of the earliest known rock art in the Horn of Africa and the African continent in general. The prehistoric cave paintings are estimated to be between 11,000 and 5,000 years old. They show cows in ceremonial robes accompanied by humans, domesticated dogs and even a giraffe. The cave paintings are excellently preserved and retain their clear outlines and strong colors. 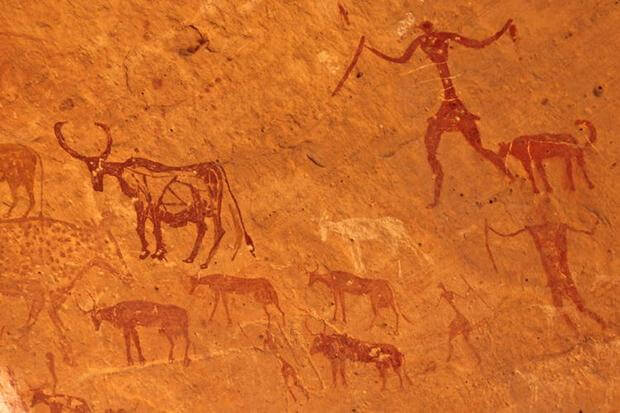 Tadrart Acacus form a mountain range in the Sahara desert of western Libya. The area is known for its rock paintings dating from 12,000 BC to 100 AD. The paintings reflect the changing environment of the Sahara desert which used to have a much wetter climate. Nine thousand years ago the surroundings were green with lakes and forests and with large herds of wild animals as demonstrated by rock paintings at Tadrart Aracus of animals such as giraffes, elephants and ostriches.

The Chauvet Cave in southern France contains some of earliest known prehistoric cave paintings in the world. Based on radiocarbon dating the oldest paintings in the cave may be up to 32,000 years old. The cave was discovered in 1994 by Jean-Marie Chauvet and his team of speleologists. These paintings contain images of animals such as the ibex, mammoth, horses, lions, bears, rhinos and lions. Advanced techniques such as the use of perspective is clearly demonstrated in the ‘panel of horses’ which shows several animals on the same plane. 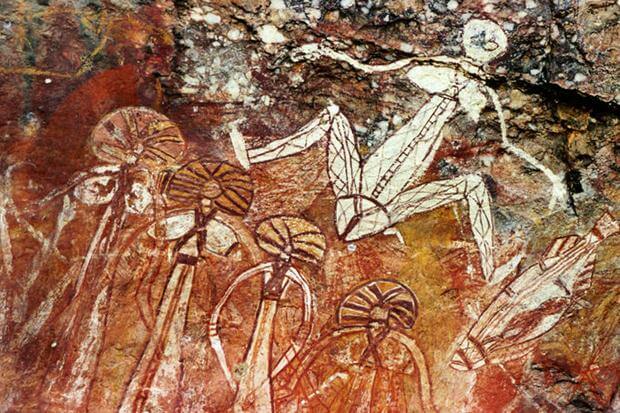 Located in the Northern Territory of Australia, Kakadu National Park contains one of the greatest concentrations of Aboriginal art sites in Australia. Approximately 5000 art sites have been discovered in Kakadu along the escarpment and on rock outliers. The Aboriginal painting are estimated to range in age from 20,000 years to the recent present although most of the paintings are less than 1500 years old. The site at Ubirr has some of the finest examples of “X-ray art” in the world. The Aboriginals not only painted the outside but also the bones and internal organs of the animals. 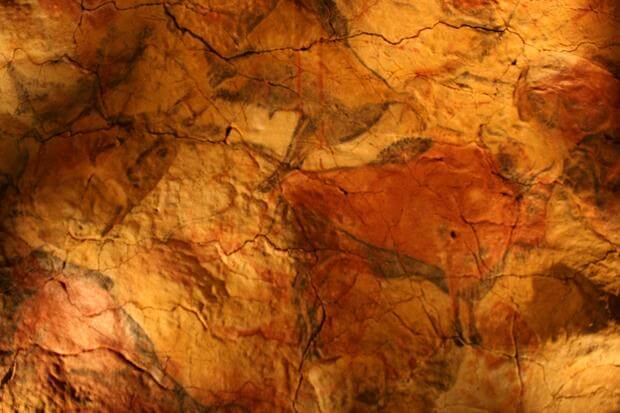 Discovered in the late 19th century, the Altamira Cave in northern Spain was the first cave in which prehistoric paintings were discovered. The paintings were of such an astounding quality that the scientific society doubted their authenticy and even accused it’s discoverer Marcelino Sanz de Sautuola of forgery. Many people simply did not believe prehistoric man had the intellectual capacity to produce any kind of artistic expression. It was not until 1902 when the paintings were acknowledged as genuine. The charcoal and ochre images of horses, bison and handprints in the Altamira Cave are among the best preserved cave paintings in the world. 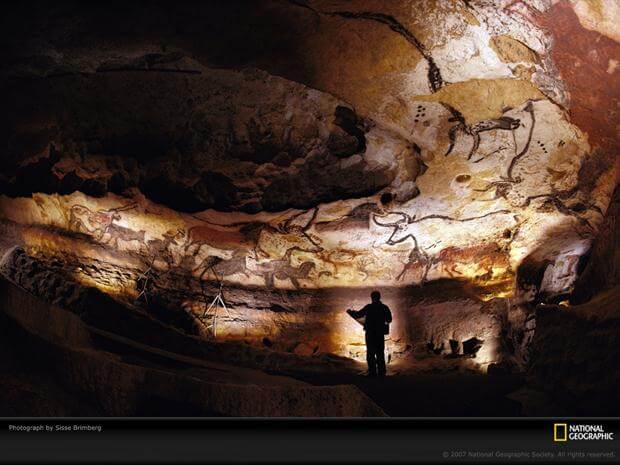 Nicknamed “the prehistoric Sistine Chapel”, the Lascaux Caves are a cave complex in southwestern France decorated with some of the most impressive and famous cave paintings in the world. The Lascaux paintings are estimated to be 17,000 years old. Most of the cave paintings are situated quite a distance away from the entrance and must have been created with the aid of candles. The most famous cave painting is The Great Hall of the Bulls where bulls, horses and deers are depicted. One of the bulls is 5.2 meters (17 feet) long, the largest animal discovered so far in any cave.

Due to the damage resulting from too many people visiting the caves, the Lascaux paintings have been permanently closed to the public. The French government has built Lascaux II near the site where tourists can see a copy of the original cave.