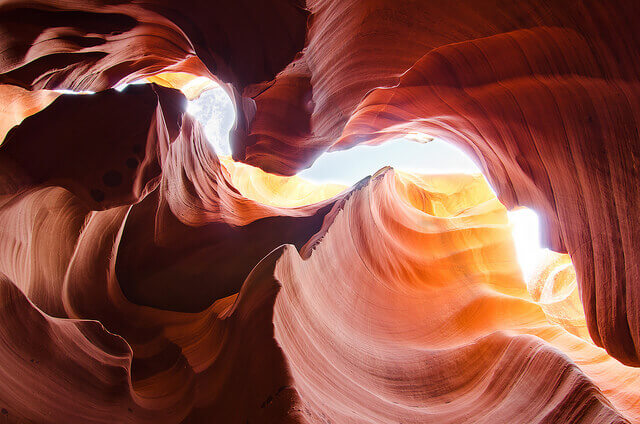 The Bungle Bungles Range is a collection of sandstone and conglomerates. The formations on this canyon are formed by wind and rainfall over millions of years. Some of the things that can be seen within these formations are slot canyons, cracks, gorge, and natural amphitheaters, like the Cathedral Gorge.

The Weano Gorge is located at Karijini National Park; this is the second largest park in Western Australia. The towering walls of this slot canyon are filled with banded iron rock. When you’re at the top of the walking trails, you’ll be able to see some spectacular sights.

The curvaceous, strangely angled walls of these slot canyons are formed through erosion of sandstone caused by flash flood and other processes.

The beautiful colors, textures, curves, and breathtaking lighting, especially in the summer are the reasons why photographers and tourists love visiting this spectacular slot canyon.

An amazing geological formation, The Wave is made by 2 water-eroded troughs, one of which measure 7-ft. wide and is considered as a slot canyon.

The Wave in Arizona is a very popular destination for tourists, photographers, and hikers. To avoid damage and erosion caused by human feet, only 20 tourists per day are allowed to walk through the 52-ft. long slot canyon.

Years ago, Sinai was covered by ocean and it left layers upon layers of sediment which was eroded away by water over millions of years. The layers have colors like red, magenta, purple, gold, and yellow.

The Colored Canyon is filled with tall walls, some walls rises to the heights of more than 100 feet and some with only a few feet wide.

The Siq or The Shaft is a slot canyon which is the main entrance of the City of Petra. It is a three-quarter-mile long narrow gorge; there is a 9.8 ft. wide pathway that leads to Al Khazneh or The Treasury. Al Khazneh is the most complex ruin in the City of Petra, its walls is about 300-600 ft. tall.

The Siq is not formed by water erosion; it is formed through geological fault. It was split apart by tectonic forces and it was smoothed by water later on.

Some of the things that you can see around the Siq are the remains of ancient constructions, which include two abutments and an archway with some hewn stones leading to the grand entrance of the city.

This is the longest and deepest slot canyon found in the Southwest of U.S. This slot canyon has an area of over 13 miles with both sides of the cliff measuring about 500 feet.

Experienced hikers love to go here because of its length and diversity of terrain. However, hikers need to get a permit first before they can hike the area. The Buckskin Gulch is a very dangerous place to hike; flash floods may happen during certain seasons.

Unlike other slot canyons which are made of red and gold sandstone, the Witches Gulch is made up of some emerald colors. Hikers will walk through a wood boardwalk which will lead them into the moss-covered sandstone slot. There are some narrow places here; you can touch both sides of the Witches Gulch canyon.

The Subway which can be found on the Left Fork of North Creek is one of the favorite destinations for hikers and photographers. This slot canyon has a unique tunnel shape similar to a subway train. The rock floor of this slot canyon is filled with potholes from the flowing water. The floor is usually filled with cold water, which gives the slot canyon a beautiful mix of colors.