Whales are one of the most beautiful creatures on Earth. These massive sea creatures always fill us with awe and most of us just wanted to see them up close and witness their stunning beauty.

huffingtonpost.com has listed the 10 best destinations for whale watching 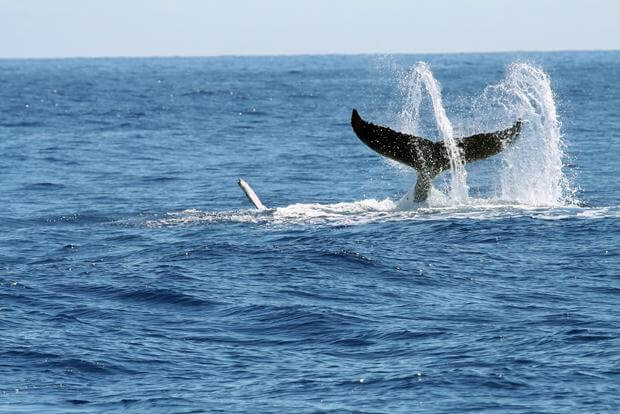 Cape Cod, Massachusetts
There are such frequent whale sightings in the Atlantic waters surrounding Cape Cod, that the World Wildlife Fund named Massachusetts one of the top 10 whale-watching spots in the world. The “wow factor” here is huge, as minke, finback, and humpback whales regularly glide through the waters, and glimpses of them spouting and breaching are practically guaranteed. Indeed, many local whale-watching companies declare a 99-percent whale-spotting success rate during the peak viewing months of April to October. Some of the best whale-watching adventures leave from Provincetown on Cape Cod, like Dolphin Fleet. 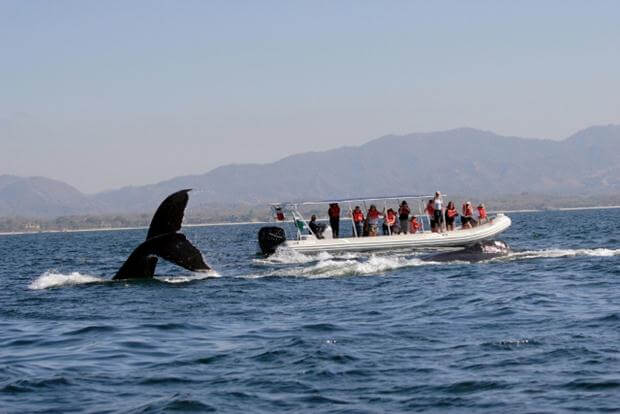 Los Cabos, Mexico
As if the brilliant beaches, luxury resorts, and near-perfect year-round climate weren’t enough incentive to visit Los Cabos, Mexico, there’s the added spectacle of spouting whales each year from January through April. Indeed, magnificent humpbacks migrate over 6,000 miles from Siberia and Alaska to the warmer waters of Baja California and the Sea of Córtez just in time for peak tourist season; you’ll also spot grays, blues, and sperm whales. Whale-watching adventure boat tours aplenty will take you out to see whales mating and mothers nursing and playing with their young; gray whales prefer the protected shallow lagoons of San Ignacio, Magdalena Bay, and Ojo de Liebre. 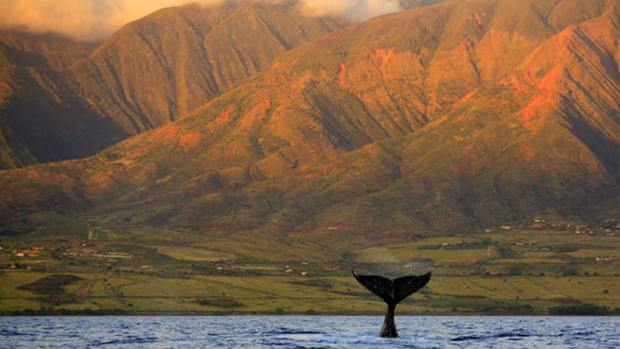 Hawaii
Each winter, droves of visitors migrate to the tropical paradise of Hawaii at the same time as the state’s official marine animal, the humpback whale, also makes its way to the Aloha State from the northern Pacific. The clear waters surrounding the islands provide visibility of up to 100 feet below the surface, making for incredibly easy sightings on whale-watching adventures between the peak late November to mid-April season. While whales tend to visit all of the islands, Maui is their number-one watering hole, with many species gathering, at some point, along the southern and western shores between Wailea, Kihei, Lahaina, and Ka’anapali. 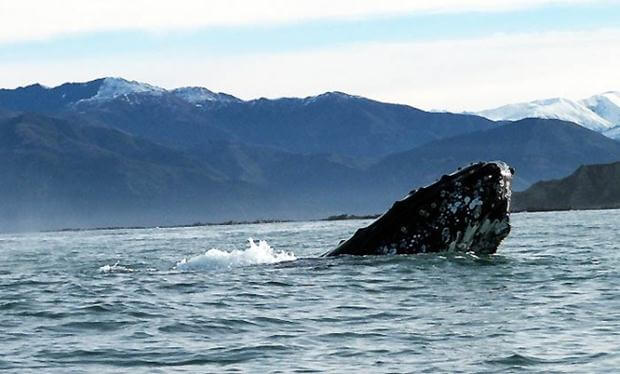 Kaikoura, New Zealand
Located on the east coast of New Zealand’s South Island, the small seaside town of Kaikoura enjoys international acclaim as an ecotourism center. And, when it comes to whales, it ranks as one of the world’s most likely places to see a sperm whale, thanks to the throngs of them that like to congregate off its shores pretty much all year long. What’s more, you’ll also spot orca (December to March), humpbacks (June and July), occasional pods of pilot whales, and, if you’re lucky, even a mighty blue (June to September). All are joined by dolphins, fur seals, and seabirds that come together here to compose an incredibly rich marine environment. For the chance to witness a sperm whale, hop on-board a whale-watching tour boat, or, for a truly unique whale-watching adventure, opt for a 30-minute flight via Wings Over Whales. Dominica
Scuba divers already know this remote Caribbean island thanks to its brilliant coral reefs, magnificent sea life, and bubbling underwater hot springs. But the island recently earned a new title, of “Whale Watching Capital of the Caribbean,” which launched this eco-friendly destination to a whole new level. Set between Martinique and Guadeloupe, and often visited by 40-ton whales, who like to socialize, mate, and play off its shores, a boat excursion from Dominica promises a 90-percent chance of spotting one up close. The waters are particularly partial to sperm, killer (both “false killers” and orcas), and pigmy whales, which are most often seen on whale-watching adventures between late November and March. That said, many also like to hang around all year long.

Hermanus, South Africa
There’s no need to stretch your sea legs to glimpse a fluke or spout in Hermanus. Located in Walker Bay, at the southernmost tip of Africa, and often referred to as the Riviera of the South, Hermanus offers, hands-down, the best shore-based whale-watching opportunities in the world. In July every year, onlookers eagerly await the annual visit of the southern right whales that love the warm, shallow waters surrounding this seaside destination. A 6-mile-long cliffside path along the coastline makes the perfect perch from which to gaze at whales frolicking in the open waters – complete with benches, telescopes, and information plaques. Visit from May through December for the best whale-watching adventures – better yet, come in September and commemorate the whales’ residency with the annual Hermanus Whale Festival (September 30 to October 4, 2011). 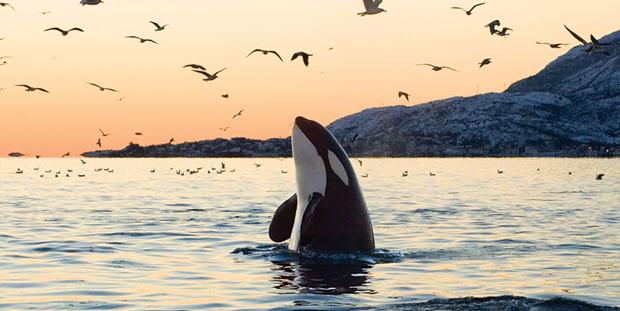 Orcas Island, Washington
No list of whale-watching destinations would be complete without a nod to Orcas Island, the largest of the islands off the coast of Washington state. Often touted as the “gem of the San Juan islands,” this nature-lovers’ paradise also bears a name reminiscent of the killer whales that gather off its 125 miles of coastline. The island is a haven for marine mammal lovers, who flock here in spring and summer (April through October) to go on whale-watching adventures and watch pods of cresting gray whales and orcas. Quebec, Canada
Quebec, Canada, is home to two types of whales that are rare to other parts of the world. Witness the nearly extinct North Atlantic right whale here (as little as 300 remain) and beluga whales cruising down the St. Lawrence River. These massive white beasts are much-beloved for their expressive faces and like to swim with their heads above water, to the great delight of passing whale-watchers. Quebec abounds with picturesque places to take whale-watching adventures and see whale flukes and spouts between May and October, but Tadoussac is the best for belugas and Percé for every other variety (mike, humpback, and blue). What’s more, the small, inflatable dingies favored by the province’s whale-watching companies can get up close to these splendid creatures. 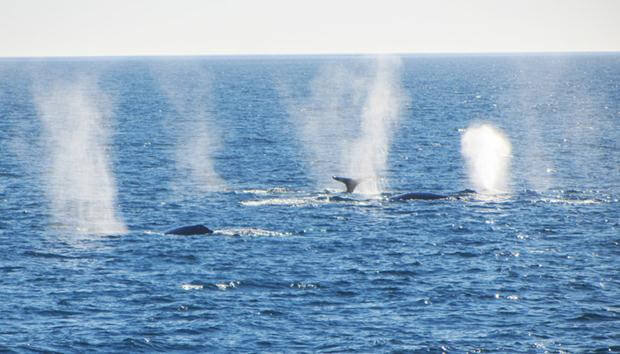 San Diego
Sure, a visit to Shamu and entourage at SeaWorld is fine, or encounter gargantuan gray whales in their natural element, out in the great blue yonder. They pass in close proximity to San Diego Bay every winter (peak viewing time is from mid-December to mid-March), en route to their breeding lagoons at Baja’s southern tip. The sight of these gentle, 50-foot-long whales traveling together on an epic 5,000-mile journey is an inspirational one that San Diego residents and visitors can experience from land or sea – while numerous local companies can bring tourists to the whales by boat. Or head to the city’s prime land-based viewing spot, the Cabrillo National Monument, where a panoramic outdoor observatory provides views from 400-plus feet above sea level. The Azores, Portugal
An isolated island chain in the midst of the Atlantic Ocean, the Azores and its people are intimately connected to the sea. It’s fitting then, that these Portuguese-owned islands would attract beautiful whales to their nearby shores. Of the nine volcanic islands that compose the chain, the best whale-watching is to be had in the waters between Faial, Pico, and São Jorge, where plentiful fish supplies entice abundant water mammals from April through October, including the most frequently sighted sperm and short-finned pilot whales. Hire a tour boat to observe them from any of the islands, but Pico is considered the most scenic of all for whale-watching adventures.