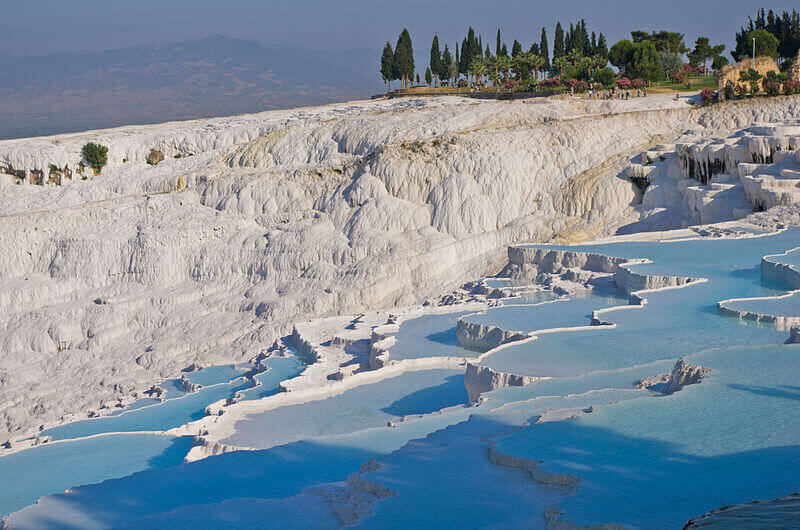 People during the ancient time of Rome used travertine as a building material. Travertine was also used in the construction of the St. Peter’s Basilica and Square in Vatican City.

This travertine terrace situated in Huanglong Valley in China has a total length of 3.6 kilometers. It is also thought that it looks like a massive dragon descending through the snow-filled mountains of the Huanglong Valley.

The Semuc Champey is not a well-known spot for a lot of people, but this travertine terrace is a popular travel destination for Central-American travelers.

Pamukkalae which means “Cotton Castle” in Turkish is a natural site located in Denizli Province, Turkey. There are a lot of beautiful attractions that can be found in this city including hot springs and travertine.

One of the main attractions in Pamukkalae is its travertine terrace, where tourists are allowed to take a bath in some of the white terraces.

Badab-e Surt in Mazandaran Province is a natural site which can be found in the northern part of Iran. The travertine terraces that can be found here have been formed thousands of years ago by flowing water from two mineral hot springs. The cooled water will then deposit carbonate minerals on the mountainside.

Bagni San Filippo is a village located at the municipality of Castiglione d’Orcia in Tuscany, Italy. Tourists can take a bath in hot thermal water from this travertine terrace.

The Plitvice National Park is the biggest national park found in Croatia and the oldest in Southeast Europe. This national park is well-known for its lakes that are separated by dams of travertine.

The travertine terraces in Hierve el Agua, also called as “the water boiled”, are some of the beautiful pools which you can see at the edge of the cliff in Oaxaca State in Mexico.