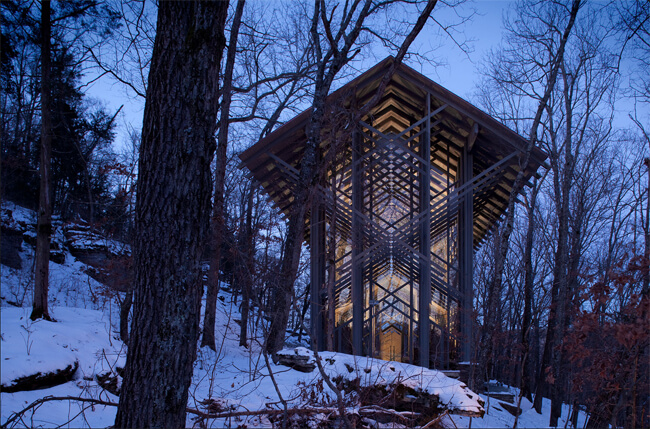 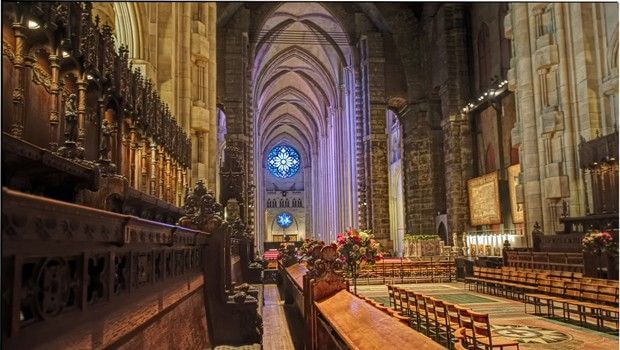 The Cathedral Church of St. John the Divine is well worth the 20-minute subway ride from Times Square. The Episcopalian Cathedral takes up an entire block and is tall enough to hold the Statue of Liberty. In fact, the only church that beats it in size is St. Peter’s Basilica in Vatican City. The limestone-granite structure is impressive enough to rival any European church–but it didn’t begin looking quite the same as it does now. When architects George Heins and Christopher Grand Lafarge first built the structure in 1892, they designed it in Romanesque-Byzantine style. Several fires and a couple of decades later, Ralph Adams Cram took over the structure and transformed it into the French Gothic style we see today. The Great Rose Window above the bronze doors on the Cathedral’s Amsterdam Avenue side is the largest stained-glass window in the U.S., with more than 10,000 pieces of colored glass. Make time to stroll around the 13-acre grounds too–in addition to the cathedral’s impressive Peace Fountain, which depicts the battle between good and evil, white peacocks roam the grounds too and if you’re lucky you’ll spot one. 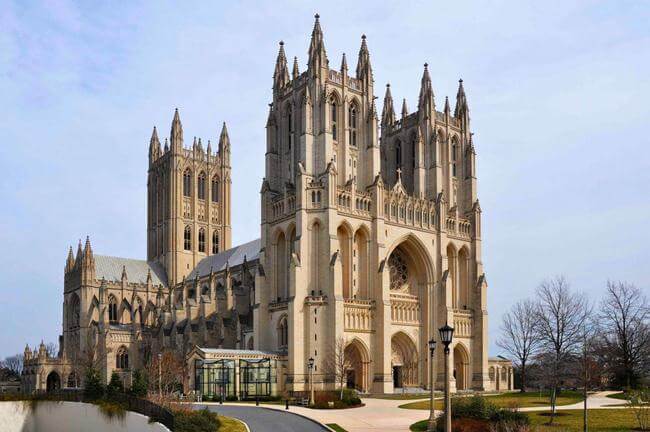 There is no shortage of churches in Washington, D.C., but none quite so noteworthy as Washington National Cathedral (officially called Cathedral Church of Saint Peter and Saint Paul). Not only has this religious institution been the site of 21 presidential funerals–from William McKinley in 1901 to Gerald Ford in 2007–but national heroes such as Helen Keller and Woodrow Wilson are interred here. As befitting our capital, the 517-foot-long building is an imposing ode to worship. The design is Neo-Gothic through-and-through, from its limestone exterior with its steep arches to its stained glass windows and flying buttresses. It took 83 years to build and was only officially finished in September of 1990. The modern completion led to a surprising detail–a sculpture of Darth Vader at the top of the west tower (a contemporary representation of evil). Standing in for good, you’ll find a more traditional approach to religious sculpture–288 angels. Head up to the Pilgrim Observation Gallery near the Wisconsin Avenue entrance for magnificent 360-degree views of Washington, D.C. 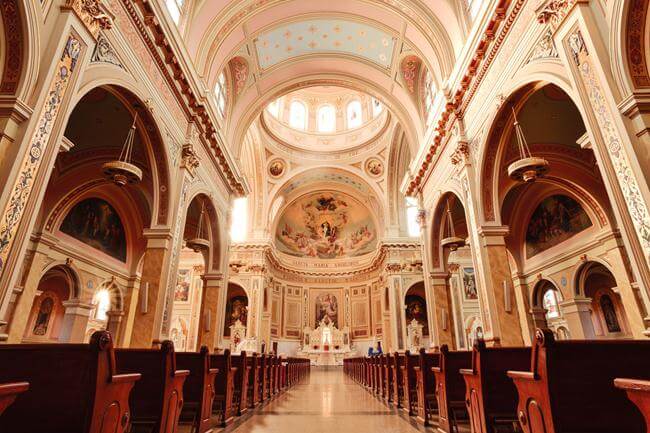 St. Mary of the Angels
Chicago

It’s something of a miracle that this stunning cathedral still exists. The first St. Mary of the Angels was built in 1899 in northwest Chicago and soon became a parish school. The present-day church was completed in 1920 following several struggles with material shortages during World War I. When the Kennedy Expressway was built in 1960, many residents left the area and in 1988 the building was closed and prepared for demolition. Fortunately, the remaining parishioners and the priests of Opus Dei were able to work together and officially save it three years later. Major repairs soon began, including the preservation of the 26 nine-foot tall angels that line the roof. Like most Italian Romanesque churches inspired by St. Peter’s Basilica in Vatican City, St. Mary of the Angels was designed in the shape of a cross, with a large dome in the center and two bell towers at its sides. Stained-glass windows inside the church depict the 12 Apostles, the Stations of the Cross, images of the saints and angels, and various other biblical scenes (there is also a painting of the Virgin Mary and Jesus that was reportedly smuggled out of communist Poland).

The Archbishops of St. Louis during the early 1900s were very persistent in their desire to build the Cathedral Basilica of St. Louis–not even a devastating tornado at the time could stop them from raising the $1 million needed to construct the Byzantine and Romanesque style Cathedral. In 1908 the cornerstone was laid and the project was dedicated to Christ and King–King Louis IX that is, officially making St. Louis the city’s patron saint. From 1930 to 1988, a series of beautiful Byzantine-inspired mosaics depicting the life of St. Louis was added, and in 1997, Pope John Paul II designated the site as a Cathedral Basilica, visiting it for himself in 1999. 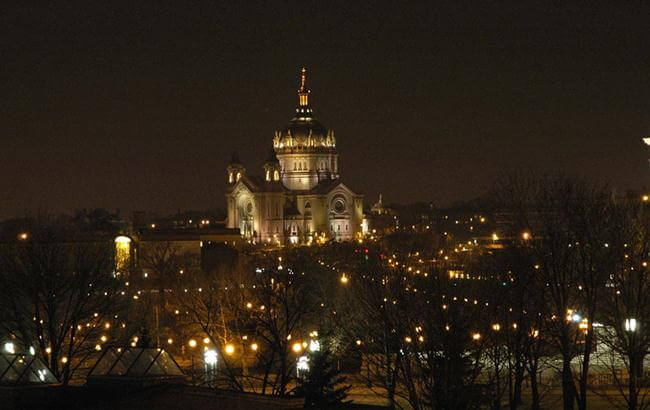 The Cathedral of Saint Paul was built in 1907 when Archbishop John Ireland saw a growing need for a larger place of worship in the area. The Cathedral itself was designed in the Beaux Arts architectural style and is now a major piece of St. Paul’s skyline. In 2012, the Vatican declared the site to have a “bond of spiritual affinity” with its sister church, the Basilica of Saint Paul Outside the Walls in Rome–which means, in plain terms, if you make a spiritual pilgrimage to St. Paul’s Cathedral in Minnesota, it’s considered to be the same thing as making a spiritual pilgrimage to the Basilica in Rome, symbolically speaking. As a result, the Cathedral brings in tens of thousands of people who come to pray and admire the beautiful bronze grills that portray the major events in St. Paul’s life from his conversion story to his eventual martyrdom for the church. It’s not all about St. Paul though–the Cathedral’s Shrine of the Nations was built to honor other saints who are important to the ethnically diverse people who have helped make the church what it is today.

Located deep in the heart of the Ozark Mountains, Thorncrown Chapel sits on top of 100 tons of local stones, allowing it to blend almost entirely into its natural surroundings. The 48-foot-tall structure also has 425 windows to let in views of the forest growing around it. Arkansas native Jim Reed originally purchased the land as a place to put his retirement home, but instead decided to create a peaceful spot where travelers could worship in a natural setting. Native pine was used to build the structure, and every piece of wood was literally carried in, since using large trucks would disturb the integrity of the forest. 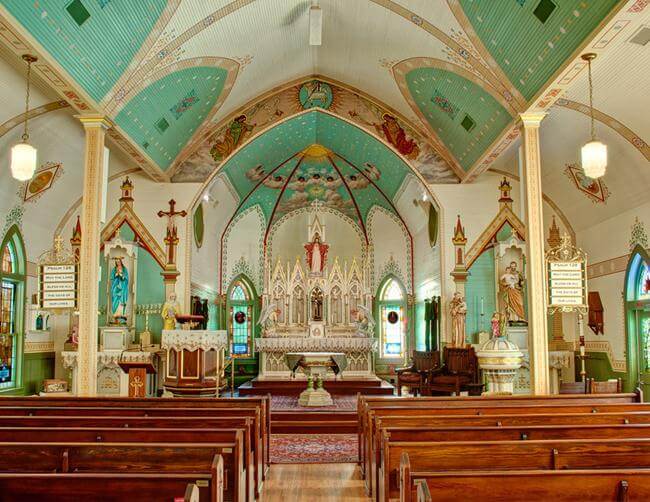 There are several painted churches in this vibrant German-Czech area between Houston and San Antonio, but St. Mary’s at High Hill is known as the Queen. The church was built in 1906, and 18 of the stained glass windows portraying Biblical scenes were purchased from Germany by members of the community and donated to the church. Inside you will also find carved statues of Jesus, Mary, and the saints, as well as a ceiling decorated with frescoes of angels, birds, vines, and grapes. The church’s main event is a parish picnic the Sunday during Memorial Day weekend, with plenty of German food and performances by German and Czech bands. 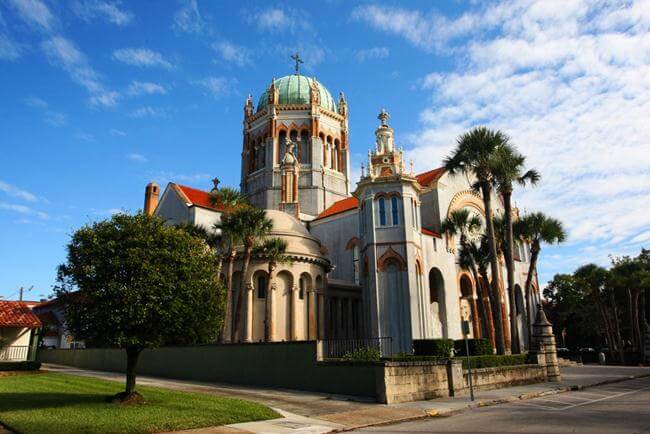 Built in 1889 by Henry Flagler as a memorial to his daughter following her untimely death due to childbirth complications, Memorial Presbyterian Church is Florida’s oldest Presbyterian Church. The design was inspired by Venetian Renaissance style (namely St. Mark’s Cathedral) and the church features a 150-foot tall copper dome with a 20-foot tall Greek Cross at the top. Inside, the great Baptismal Font was carved from a solid chunk of Siena marble while the floor is modeled after a classic Venetian floor pattern using different sized square and rectangular tiles. The choir performs from behind an ornately carved screen, and every pew, door, and panel is carved from a rich mahogany from the Dominican Republic. Flagler himself was the son of a Presbyterian minister and he later designed the stained glass windows you see today depicting the lessons of the Apostles’ Creed. The bell tower and the five pillars that surround the church actually predate the structure–they were incorporated from another building that housed this congregation that dated back to 1826. 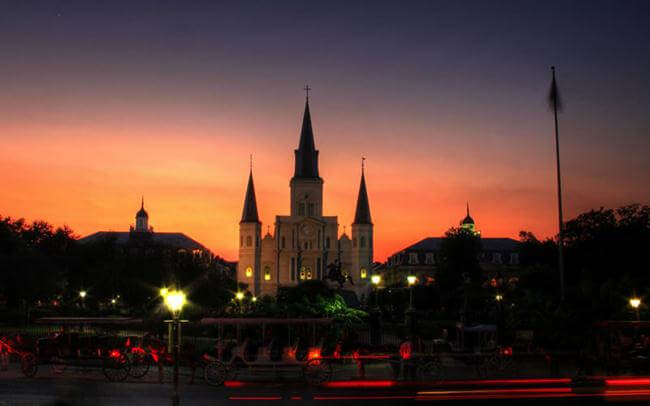 Overlooking iconic Jackson Square, the Cathedral-Basilica of St. Louis King of France is our country’s oldest continually used Catholic cathedral. Established in 1720, the original Cathedral was dedicated to French King Louis IX and was where colonists and slaves alike were baptized. Unfortunately, the original church burned to the ground in 1788 when a candle set fire to the altar’s lace draperies. A second cathedral was built in its place in 1794 and was later restored in 1849 to the condition you see it in today. The Cathedral features a central clock and bell tower and an Italian organ dating back to 1825. Luminaries have been visiting the church throughout its history. Andrew Jackson came to the Cathedral in 1840 as he returned to New Orleans for the commemoration of Jackson Square and Pope John Paul II paid a visit to this historic cathedral in 1987. 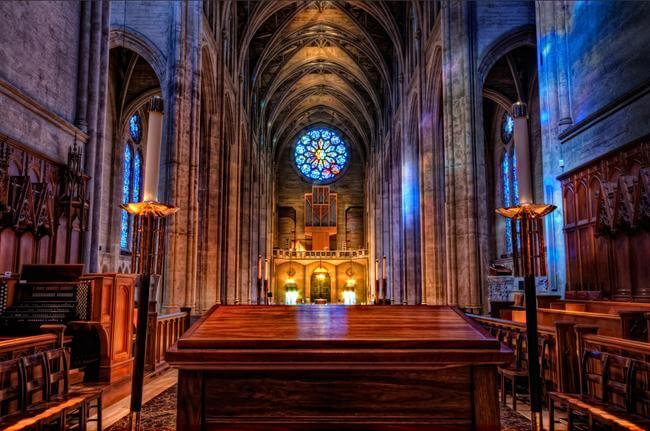 Grace Cathedral in San Francisco’s Nob Hill has a look reminiscent of the Notre Dame Cathedral in Paris. The elaborate stained glass windows were inspired by biblical stories–the Passion, Crucifixion, and the Beatitudes are depicted in the St. Matthew window and the story of Christ healing the paralyzed man is shown in the St. Mark window. The masterpiece is the window illustrating the Twenty-Third Psalm (The Lord is my shepherd, I shall not want). It was created in the medieval style of presenting the scene from the bottom up, so that it symbolically rises to heaven. Grace Cathedral is also home to an indoor and outdoor Labyrinth, recalling a tradition dating back to France’s Chartres Cathedral in 1220 when people would walk the winding path of the design as a way to release their troubles, meditate, and return to God’s healing power. The Cathedral has been hosting celebrated authors and scholars ever since it was completed in 1964–Dr. Martin Luther King, Jr. preached here in 1965 and crowds reportedly filled the Cathedral, front steps, plaza, and parking lot. Archbishop Desmond Tutu, Jane Goodall, Isabel Allende, Carlos Santana, Sandra Day O’Connor, and the Dalai Lama have all been honored speakers at Grace Cathedral’s Gresham Hall. 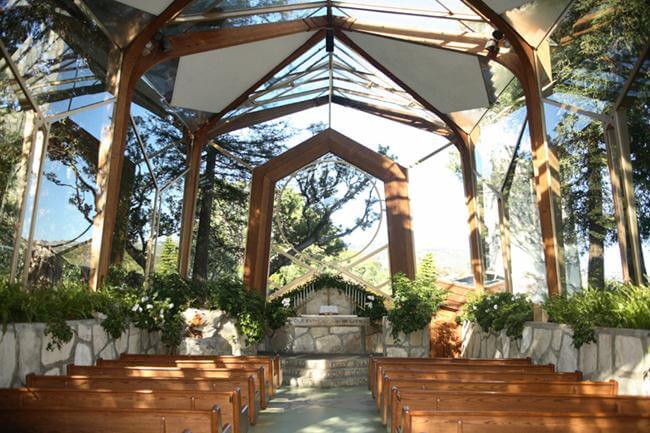 Wayfarers Chapel, about 45 minutes from downtown Los Angeles, is the perfect combination of nature and architectural genius. Designed by Lloyd Wright, the son of Frank Lloyd Wright, the “tree chapel” was made to be a natural sanctuary encased in glass with views of the surrounding forest and the nearby Pacific Ocean. These are typical traits of Organic Architecture, which aims at using nature as the framework and regards the space inside as sacred. Wright also designed the surrounding Chapel Gardens, home to Redwood trees and roses that bloom all year round. Completed in 1951, the Wayfarers Chapel was built along the Palos Verdes peninsula so that travelers could rest and give thanks to God for the beauty around them. People of all religious backgrounds are welcomed to take advantage of the beautiful natural setting–evening weddings are celebrated inside the glass chapel lit only by candlelight.

Located in Honolulu’s historic district, the Cathedral of St. Andrew serves as a reminder of Hawaii’s long Anglican (Episcopalian)-Hawaiian history. In 1861 the reigning royalty offered up a portion of their royal garden and Queen Emma herself later traveled to England to raise money and commission arches and limestone columns (the rest of the stones were quarried in Western Oahu). Hawaii’s first Gothic vaulted Cathedral was finally completed in 1886 as a memorial to Queen Emma’s husband, King Kamehameha IV. The colorful Great West window of the Cathedral was the largest hand-blown stained glass window ever built at the time. Queen Emma is also given credit for being the force behind St. Andrew’s Priory School for Girls, which shares the property and doubled as Oxford College among other locations on the television show Lost–the stained glass windows of the Cathedral’s Parke Chapel and the Gothic arches of Davies Hall are also featured in a number of episodes.