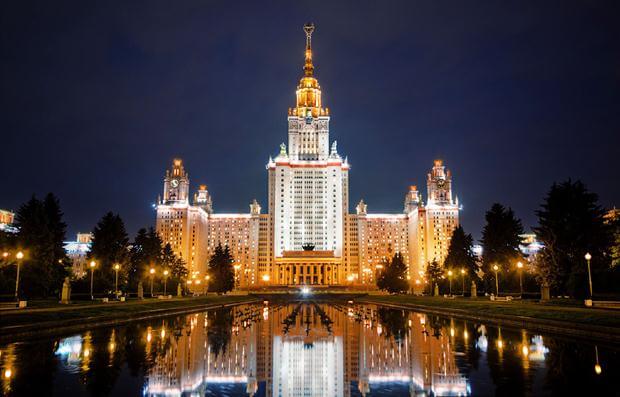 Purdue University’s 160-foot-tall landmark structure spears into the sky in West Lafayette, Indiana. Completed in 1995, Purdue Bell Tower has a clock on all four faces, a time capsule at its base (to be opened in 2095), and a seal beneath it that purportedly curses any student who walks over it. Aside from serving as a visual linchpin, the tower sends music into the surrounding atmosphere via a computerized carillon. The university itself, which was founded in 1869, has won recognition as a research institute. It’s nicknamed the “Cradle of Astronauts” thanks to its advanced spaceflight program and impressive list of spacefaring alumni, which includes Neil Armstrong. 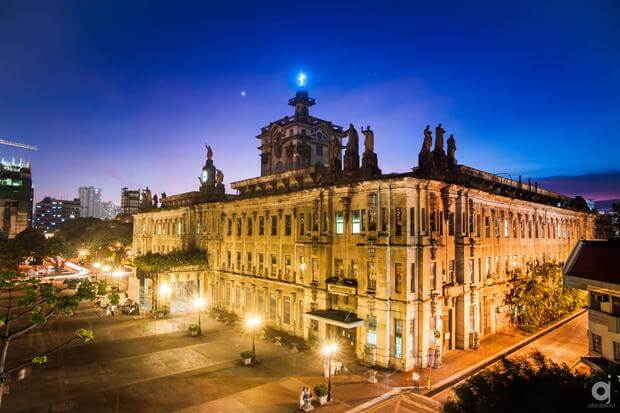 Although its tower may look somewhat squat, the Main Building of the University of Santo Tomas in Manila, Philippines is an impressive 169 feet in height. Three statues surround the clock itself, forming what has been called the “Tria Haec,” representing hope, faith and charity. It is also notable for being the first building in the country to be earthquake-resistant. Fr. Roque Ruaño designed the structure in the Renaissance Revival style in the early 1920s, and classes took place in the building from 1927. The University of Santo Tomas was founded in 1611 and is the oldest existing university in all of Asia. 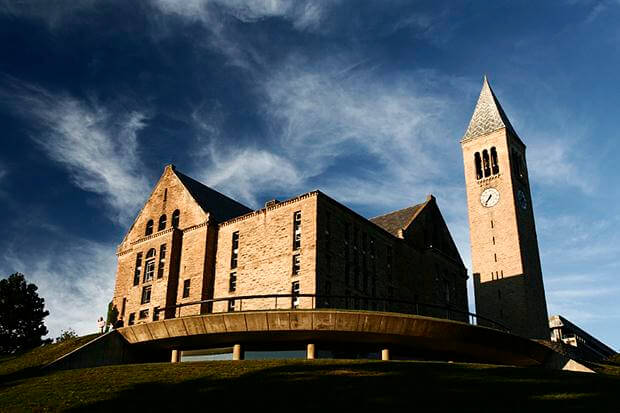 McGraw Tower rises to a striking 173 feet above the campus of Cornell University in Ithaca, New York. The Richardsonian Romanesque structure (as well as the library next to it) was designed by local architect William Henry Miller and was completed in 1891. Initially, the tower’s seven rooms were used to keep a portion of the library’s stacks safe. Now, however, McGraw contains a chimes office and practice room plus a museum. The chimes have long been an integral part of campus life, and playing them has become a hotly contested honor. History resounds here; the first set of bells rang out at Cornell’s inauguration in 1868. 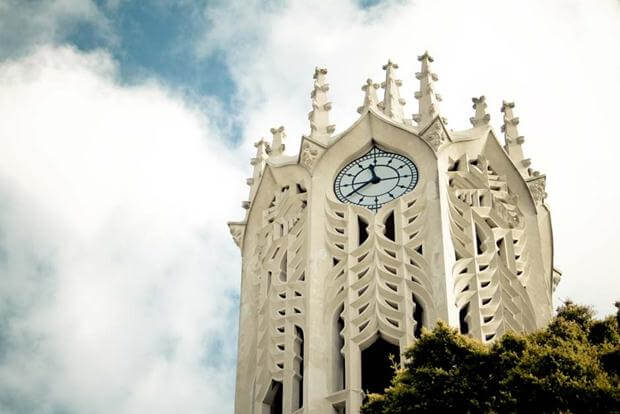 The University of Auckland was established in 1883, and the elegant tower pictured has been the centerpiece of the campus since its construction was completed in 1926. The Old Arts Building, as it is called, is 175 feet tall and was designed by US architect Roy Lippincott in an interpretation of the Perpendicular Gothic style with Art Nouveau elements. Although the building originally came under fire for not being “English” enough, it is now seen as iconic. The facade uses stone cladding from Mount Somers and Oamaru, while native New Zealand plants and animals appear in the detailing. 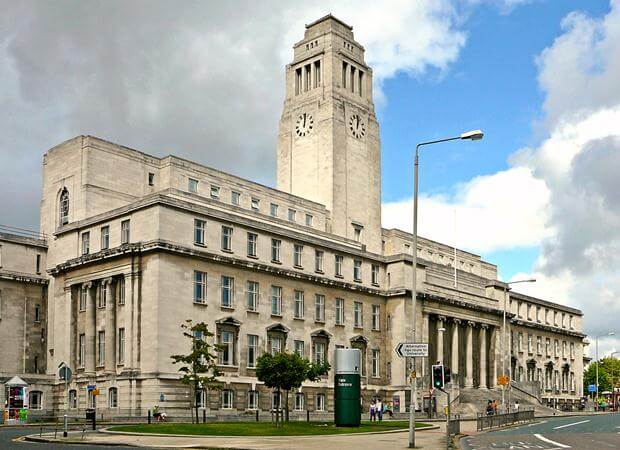 The Parkinson Building is an imposing 187-foot-high Art Deco structure on the campus of the University of Leeds in England. The building is so iconic that in 2006 the university added the clock tower to its emblem. Scottish architect Thomas Arthur Lodge designed the edifice in the early 1900s, in collaboration with English architect Thomas Geoffry Lucas. Construction started in 1938, but owing to World War II the building wasn’t completed until 1951. Established in 1904, the University of Leeds itself is a high-ranking school, well known for its research, and has the fifth largest student body in the UK. 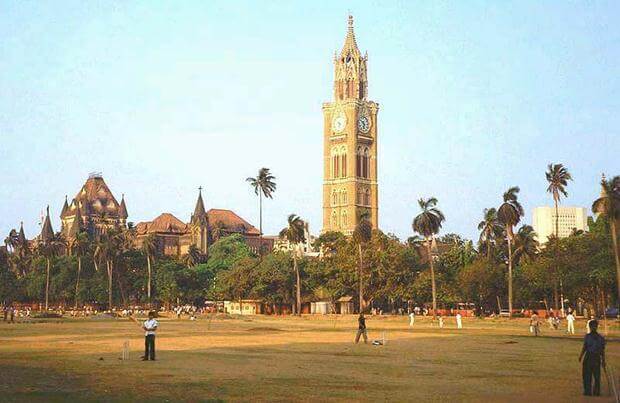 This beautiful structure graces the campus of Mumbai University in Mumbai, India. Rajabai Clock Tower was designed by English architect Sir George Gilbert Scott, taking inspiration from the structure that houses Big Ben in London. It took over nine years to build and was funded by a single benefactor, businessman Premchand Roychand, on the condition that it be named after his mother. Made from local stone in Gothic and Venetian styles, the tower stands an astonishing 279 feet tall, which made it the tallest structure in Mumbai at the time of its completion in 1878. Mumbai University was founded 21 years earlier, in 1857, and is one of India’s three oldest state universities. 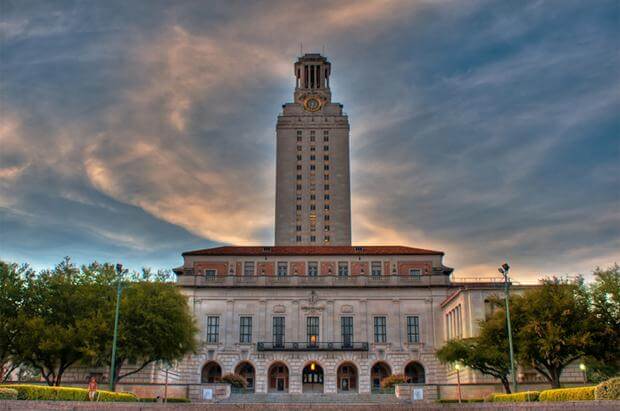 The University of Texas’ clock tower is both an impressive icon and a reminder of tragedy. The Beaux Art-style tower was completed in 1937, just over half a century after the university was founded in 1883. It stands at 307 feet tall and is among the highest buildings in the city of Austin. Both students and the public can enjoy splendid views from the top, and the fact that the clock’s four faces measure 12 feet across helps ensure that it’s visible across the campus.

Unfortunately, the clock tower is also well known for being the site of a mass shooting in 1966, when Charles Whitman shut himself in on the observation deck with a rifle and proceeded to kill 14 people and wound 31 others. Police eventually dispatched Whitman, and bullet holes still mark the tower’s facade. 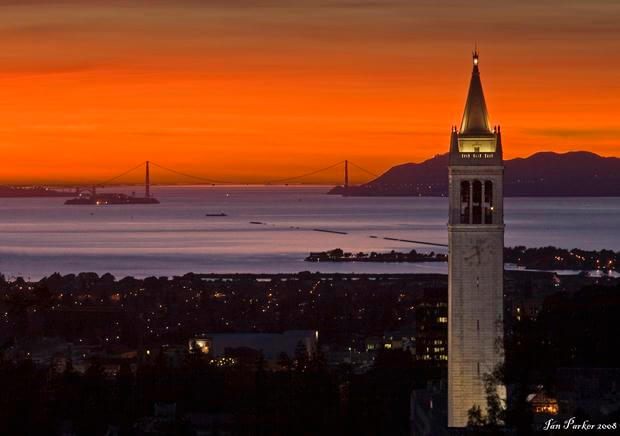 Sather Tower, better known as the Campanile, soars up to a stunning 307 feet on the Berkeley campus of the University of California. It also houses 61 bells, which sound regularly during the fall and spring semesters. The Gothic Revival-style tower was designed by John Galen Howard, beginning as early as 1903 – half a year after the spontaneous collapse of a famous Venetian campanile, and 35 years after the university’s establishment in 1868. Although Howard may have taken inspiration from the Venetian campanile, he paid special attention to the strength of the building, which is made of granite and steel. The elegant landmark was completed in 1914, and today visitors to the tower can enjoy the majestic view from an observation deck 200 feet up. 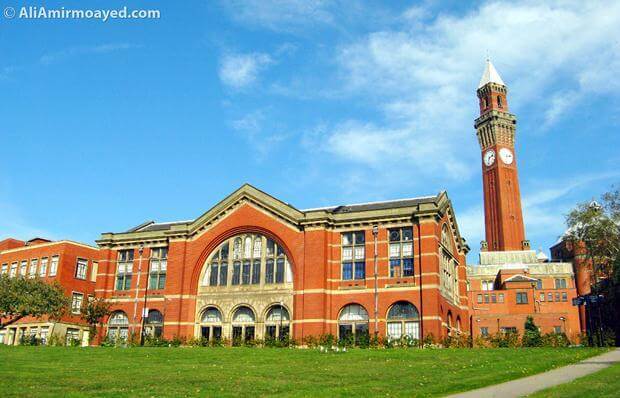 The Joseph Chamberlain Memorial Clock Tower is the tallest freestanding clock tower on Earth, even topping out the Elizabeth Tower that houses Big Ben in London. Its exact height is undetermined, but it’s estimated as being anywhere from 325 to 361 feet tall and is said to be the influence behind the “all-seeing eye” of Sauron in J.R.R. Tolkien’s The Lord of the Rings trilogy.

The tower, known colloquially as “Old Joe,” was built in the early 1900s and was designed by architects Sir Aston Webb and Edward Ingress Bell in the Renaissance Revival style. The clock face itself is 17.2 feet in diameter and has a 15-foot-long pendulum, and a 13-and-a-half-foot-long minute hand made out of copper. Like many of the others towers on this list, it has become the symbol of the campus it graces – which, in this case, is the University of Birmingham in England, established in 1900.

The central tower of the iconic Moscow State University building – constructed in the Soviet Classicist style and completed in 1953 – soars a phenomenal 774 feet into the air. Each of the corner towers stands at 387 feet in height, and between them they feature a clock, a barometer and a thermometer. The clock is the largest in Moscow, measuring 29.5 feet in diameter, and with a 13-and-a-half-foot minute hand weighing just a hair under 86 pounds. Architect Rudnev Lev Vlavimirovich designed this and many other buildings in the area, but the Moscow State main building is regarded as his crowning glory. The university itself is also the oldest in Russia, having been founded in 1755.