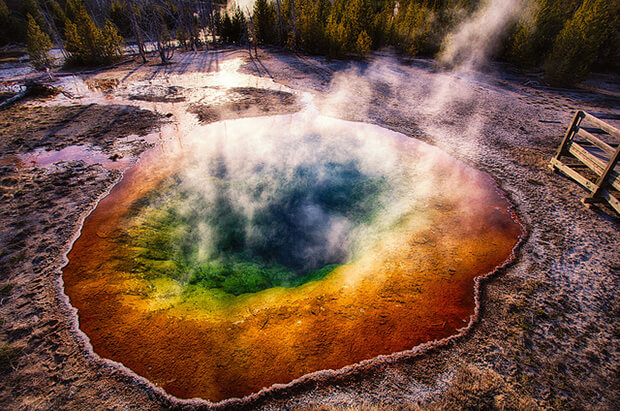 Earth is indeed a colorful planet. There’s a lot of places to choose from if you want to travel to a colorful destination around the world. Since we cannot enumerate them all, we only choose 8 travel destinations that will fill your world with COLOR!

Morning Glory Pool is a hot spring in the Upper Geyser Basin of Yellowstone National Park in the United States. The distinct color of the pool is due to bacteria which inhabit the water. On a few rare occasions the Morning Glory Pool has erupted as a geyser, usually following an earthquake or other nearby seismic activity.

Also referred to as “the river of five colors,” this biological wonder turns a striking red color every fall thanks to a flourishing, rare plant species.

Colorful Houses is the trademark of the shores of Punda in Willemstad, the capital of Curacao. The story behind the colorful houses is that a past governor complained that the intense sun reflecting off the white buildings hurt his eyes and gave him migraines, so the buildings were ordered to be painted in bright colors instead of white.

Throughout spring’s prime months, the immaculately manicured tulip, daffodil and hyacinth fields of Holland bloom into a stunning and precise array of colors.

In springtime, the fields at the base of Mount Fuji erupt with hundreds of thousands of moss blooms, or “shibazakura”, in varying shades of pink.

Rainbow Row is the name for a series of thirteen colorful historic houses in Charleston, South Carolina. It represents the longest cluster of Georgian row houses in the United States.
The name Rainbow Row was coined after the pastel colors they were painted as they were restored in the 1930s and 1940s. It is a popular tourist attraction and is one of the most photographed parts of Charleston.

7. Waihou River in the North Island of New Zealand

The Waihou River is located in the northern North Island of New Zealand. Its former name, Thames River, was bestowed by Captain James Cook.

Fly Geyser, also known as Fly Ranch Geyser or the Green Geyser is a man-made small geothermal geyser located in Washoe County, Nevada. Fly Geyser is not an entirely natural phenomenon; it was accidentally created by well drilling in 1964 exploring for sources of geothermal energy.