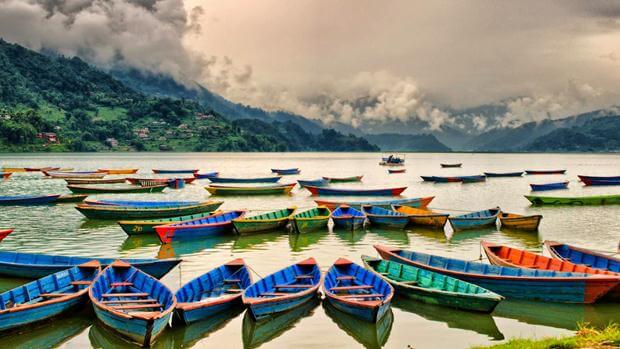 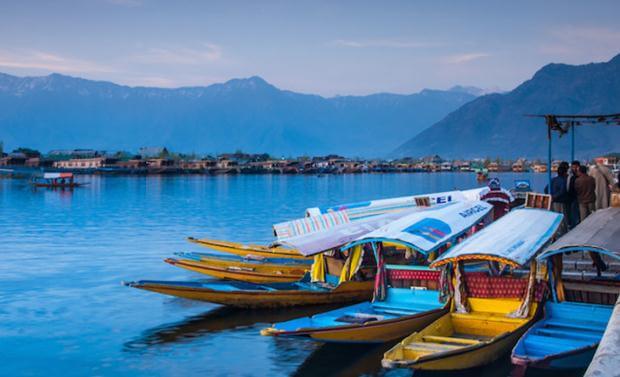 Srinagar, India
Once you wear the incredible beauty of the city in your eyes it would never come off – such is the splendor of Srinagar. It is the Himalayan summer capital of the controversial state of Jammu and Kashmir in India. This beautiful city is perched adjacent to the Dal Lake which forms the heart of the city. Houseboats float in the water and daily chores are performed by the locals in the floating market and shops with paramount ease. The city draws a considerable amount of tourists all year long. According to legends, the entire valley was a vast lake which was later made habitable by Kashyap Rishi, a notable Hindu mythological character. History has it that Buddhist Emperor Ashok had built the city of Srinagar which was later captured by the Huns and finally by a string of Muslim rulers, including the Mughals. The vast majestic Mughal Gardens bear testimony to this. 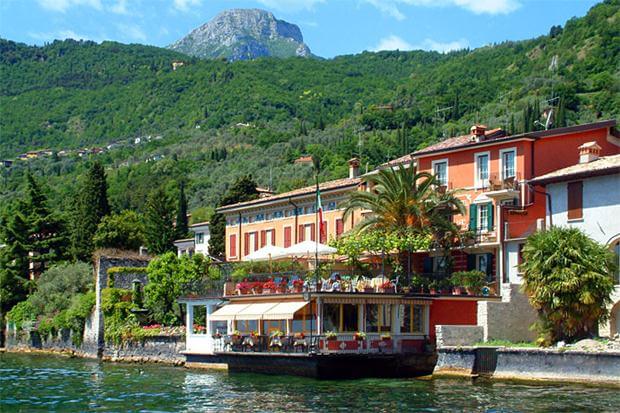 Gargnano, Italy
The quiet European hamlet of Gargnano situated on the western shores of the clear blue waters of Lake Garda imparts a typical European country life feeling. Even Mussolini could not escape the enveloping charm of this lakefront heaven and kept on coming back from time to time. When in Gargnano, the history buffs can check out the Monastery of San Francisco. The adventure seekers can try their hand at sailing as the place is popular for hosting International level regattas on the lake. Explore the dreamy inland area and watch Gargnano cast a spell over you. And finally, is it possible to forget food when we are in Italy? This old bewitching fishing town will not only enrich your aesthetics but also please your taste buds. Absorb the slow pace of life as you take a plunge in the sinfully sweet gelatos or gorge on a pizza. Life is good here! 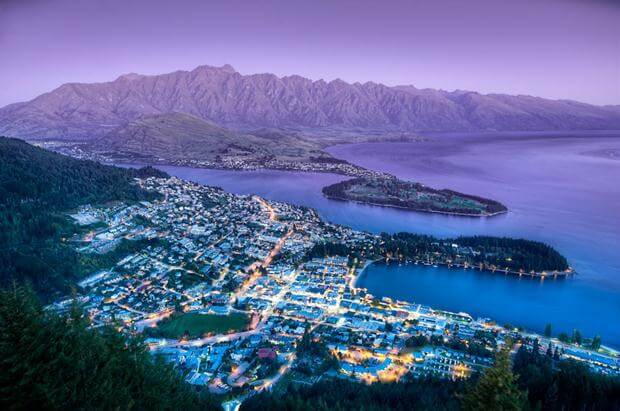 Queenstown, New Zealand
Just when you are about to form an idea in your head that lakeside cities can only be characterized with a lazy life, Queenstown comes in the picture and turns your precious judgment upside down! This town dwells Deep South in the remote country of New Zealand, nestled amidst towering Southern Alps and fed by the waters of Lake Wakatipu. The discovery of anephradite jade, known as Pounamu to the Maori people, is responsible for the foundation of this city. This stone which holds high cultural relevance to the Maori people was unearthed here and the early Maori people kept on revisiting the place for collecting more Pounamus. Later on Europeans flocked to this town in greed of gold. The present day world considers Queenstown the ‘Adventure Capital of the World’. Bungee Jumping, Snowboarding, Skiing, Sky diving, Paragliding, Jet skiing are only a few demos of what Queensland can offer. Since tourism is the primary business here travelers are extremely well taken care of. 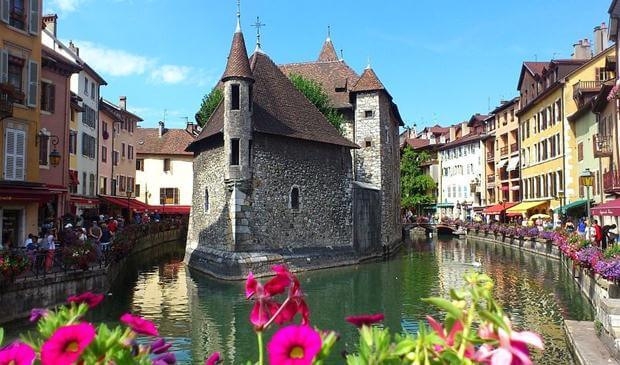 Annecy, France
The azure water of Lake Annecy welcomes a traveler to the magical town of Annecy blooming under the shadow of the French Alps. The picturesque lake is one of the cleanest lakes in Earth. Nature is plentiful in the peaceful lake town with the backdrop of the Alps. Melting of Alpine glaciers some 18000 years ago led to the formation of this lake. It is believed that Annecy is one of the older towns in the Alps and it earned considerable amount of importance in the past due to its proximity to the city of Geneva. Nowadays Annecy has embraced industrialism and is thronged by tourists. The spot is famous among cyclists. Provisions are available for exploring underwater archaeological sites, dating back to the Neolithic era.The town of Annecy remains lit by the sun till late night during summer time. The old town of Annecy is sure to steal your heart away with its winding pedestrian lanes along the canals.

Pokhara, Nepal
This is an unusual Asian town which you ought to experience before life weighs you down. The city thrives on the shore of the breathtaking Phewa Lake in Nepal encircled 180 degree by the whitewashed Annapurna range with its crystal clear reflection falling on the lake. This Himalayan delight is the paradise of paragliding enthusiasts. On a clear day, colorful wings crisscrossing the white background is a common view.Several uphill hiking trails through the woods are scattered around the city. Pokhara is a hotspot to bask in the beauty of the mighty Himalayas. The first settlers of Pokhara were the Aryans, though the exact history is not certain and ambiguity still exists. The place lies on the then important trade route, which connected India to Tibet. Prior to the construction of the linking highway to this lake city, getting here required several days pony trek and passing deadly terrains. Pokhara is the land where an amalgamation of religion, ethnic groups, culture and food took place. 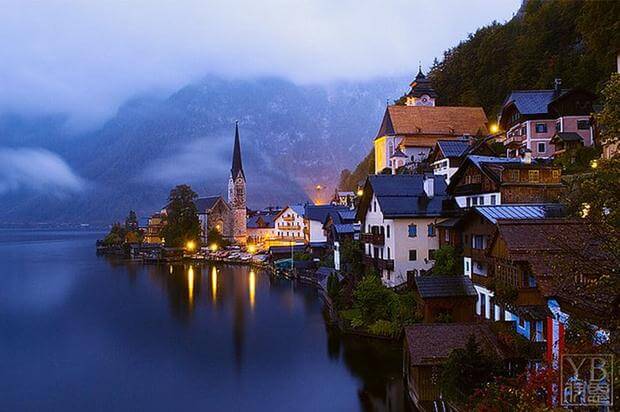 Hallstatt, Austria
Hallstatt is a sparkling lake valley in upper Austria which had been in an intimate relation with salt. Life here revolves around the salt mine in the mountains of this valley and the lake serves as the central lifeline. The Hallstatt Period derived its nomenclature from this place in Europe. Traces of ancient Romans inhabiting this tiny hamlet are sometimes found in the pages of history. In 1734,a fully preserved body of a prehistoric miner was encountered in its salt mines.The village is peaceful and the best way to soak in its beauty is by taking a boat ride in the subterranean salt lake of Hallstatt. Such is the inspiration of this heaven on Earth that, spellbound by its graceful splendor,a Chinese mining company established a life-sized replica of this quiet sentinel in China. While in Hallstatt, do not forget to slide into the salt reserves or take a nature walk. 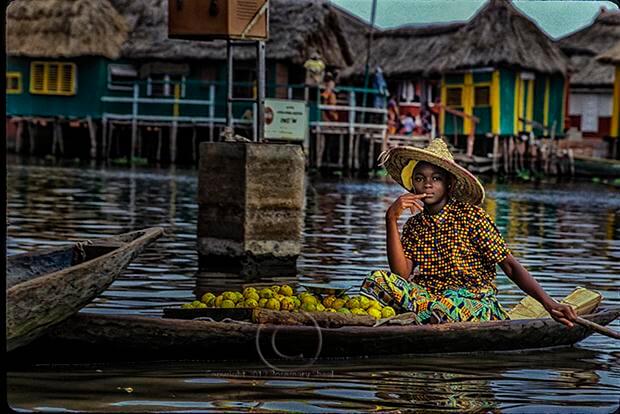 Ganvie, Benin
Ganvie has the most interesting history and the weirdest geography of all the lakeside cities in this list. It is not just a mere lake city but an entire dwelling established on water. Referred frequently as the Venice of Africa, the village of Ganvie floating on Lake Nokoue was founded by the African Tofinu people. In the seventeenth century the powerful Portuguese were looking out to capture the African people and enslave them. In an interest to save their own selves, the Fon tribe hatched a deal with these Europeans. The pact required the Fon race to capture people of other tribes and trade them against their own freedom. Thus began the agony of the other tribes and their fight to defeat the more powerful Fons did not yield much result. However, the members of the Tofinu tribe came up with a brilliant idea to evade the Fons. The Fons were religiously forbidden to attack people living in water. And thus was born this peculiar settlement in Ganvie. All the buildings here stand on stilts. The sudden small patches of islands peeping out of the lake are used by the locals of Ganvie to keep their cattle. Obviously in this part of the globe, boats are as important as oxygen! 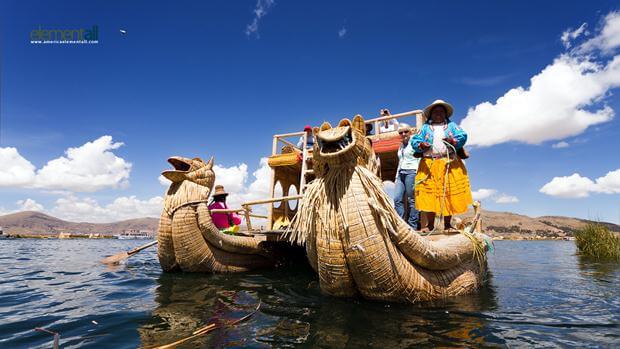 Uros Islands, Peru
Imagine walking about on a floating land, knitted by intertwined reeds, on a gigantic and panoramic lake! This is life in the lake lands of the Uros in Titicaca, off the coast of Puno in South-eastern Peru. All the islands of the Uros tribe are made by tying the totora reeds which grow at the bottom of the shallow lake. Boats made out of these reeds, previously used by the Uro fishermen, are nowadays only employed to provide pleasant trips to the tourists. The reeds are also served as local delicacies! The pre-Incan Uro people have an unclear history regarding their origin, but all the probable hypotheses point to the fact that these people did not share a warm bond with the Incas. One legend states that the Uro people on the lake existed during the dark days much before the birth of the Sun but they lost their status as super-beings when they mixed with the humans. The theory cannot be sealed with certainty, but that does not make the Uro people or their lifestyle any less attractive. It is the perfect blend of mystery and awe. source; about.com. 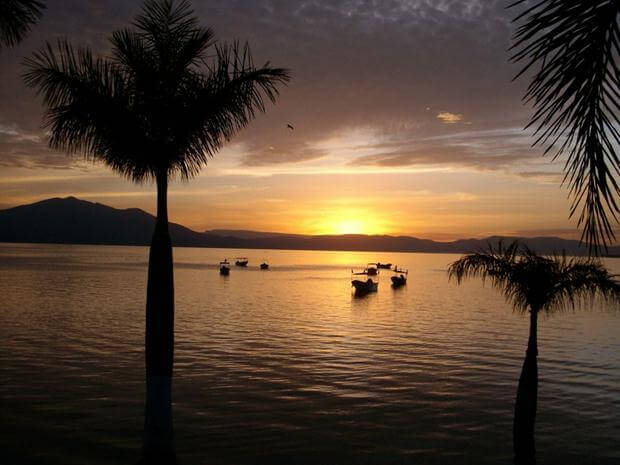 Chapala, Mexico
Chapala, a dream sentinel by the shore of Lake Chapala is a place where nothing ever goes wrong. It is endowed with oodles of optimistic energy. The national geographic quoted Chapala as the city having the second best climate of the world. The pleasant temperate climate of the city makes life easy but obviously the best part about this town is its warm friendly Mexican population. These residents always greet people with broad smiles and stand by each other when times are rough. Here random strangers offer lifts to tired pedestrians walking with heavy loads. Travelers who experience this generous city refuse to leave and in course of time shift their base to Chapala. Nature in Chapala is wildly colorful. Flowers spring out from each nook and corner of this city. To match their pace, even the buildings paint themselves with bright hues. 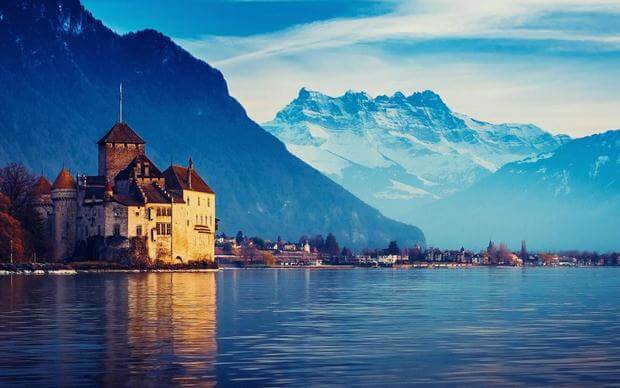 Geneva, Lakeside Cities of Switzerland
If you are searching a city with the right mix of business, intellect, history and nature then your search should end at Geneva. The plush cosmopolitan city is unique in many ways. The diplomatic capital of the world rests on the bank of Lake Geneva, Europe’s largest alpine lake.It is the hub of most of the international agencies and United Nation programs. The Romans were the first famous settlers of this city and they greatly contributed in enriching Geneva’s culture. Throughout the middle ages, the city served as an important seat for trade. The attractive setting of the lake city amid its rich nature has drawn numerous admirers who strived to make Geneva a part of their kingdom. It is the capital of the ‘Republic and Canton Of Geneva’ and at the same time a neutral territory. When the rest of the world fights to combat terrorism, violence against women, financial scams and civil wars, the gravest trouble faced by the people here is dog droppings!