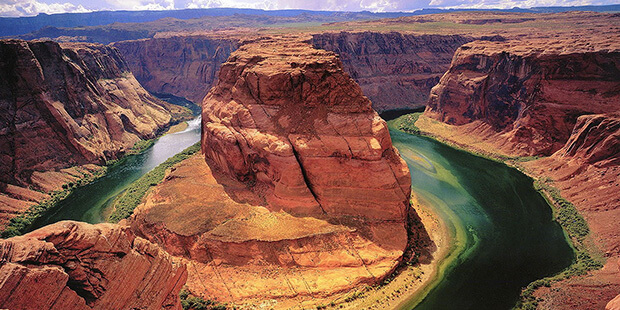 Are you planning a vacation or just craving for some eye candy?, discover the various things you can do at 10 of the most exquisite National Parks in America – Parks you should visit at least once in your lifetime!

Grand Canyon National Park is the United States’ 15th oldest national park. Named a UNESCO World Heritage Site in 1979, the park is located in Arizona. Unique combinations of geologic color and erosional forms decorate a canyon that is 277 river miles (446km) long, up to 18 miles (29km) wide, and a mile (1.6km) deep. Grand Canyon overwhelms our senses through its immense size.

Things you can do at Grand Canyon National Park:

A 277 mile long (446 km) canyon separates the park into South and North Rims.

The South Rim of the Grand Canyon is Open All Year and is located on the “Arizona” side of the Canyon. The South Rim receives 90% of the park’s visitation.

The South Rim has an airport and rail service and is a 90 minute drive from Interstate 40 and the transportation centers of Williams and Flagstaff, Arizona. A larger city with a major airport, Phoenix, Arizona, is also on this side of the canyon, and is approximately a four hour drive.

The North Rim of the park is more remote, and harder to get to.
Lodging, restaurants and shops are open from May 15th through October 15 each year.
The North Rim receives 10% of the park’s visitation.

Situated in the south-east part of the island of Hawaii (Big Island), the easternmost island of the State of Hawaii, and includes the summit and south-east slope of Mauna Loa and the summit and south-western, southern, and south-eastern slopes of the Kilauea Volcano. The park extends from the southern coast, with its volcanic sea cliff headlands to the summit calderas of Kilauea, the most active volcano in the world (with more than 50 recorded eruptions in the last 33 years up to 1985) and Mauna Loa volcanoes. The latter is a massive, flat-domed shield volcano built by lava flow layers and is considered to be the best example of its type in the world, extending from 5,581 m below sea level to 4,169 m above.

Things you can do at Hawaii Volcanoes National Park:

Getting to Hawai‘i Island

Rental cars may be reserved at both Hilo and Kona airports. At various locations on the island, the public bus (Hele On Bus), commercial tour buses, taxis, motorcycles, and bicycles are available. No rental vehicles or bicycles may be obtained in the park.

Hele On Buss is a public bus service with limited routes. There is no public transportation within the park.

Olympic National Park is a United States national park located in the state of Washington, in the Olympic Peninsula. The park has four basic regions: the Pacific coastline, alpine areas, the west side temperate rainforest and the forests of the drier east sideWith nearly one million acres, Olympic encompasses several distinctly different ecosystems and protects a rich mosaic of natural and cultural history. Untamed rivers flow from glacier-capped peaks through valleys of old-growth forests, waves crash against a shoreline rich with life, and only trails traverse the vast interior of this internationally recognized wilderness.

Things you can do at Olympic National Park:

Death Valley National Park is a national park in the U.S. states of California and Nevada located east of the Sierra Nevada, occupying an interface zone between the arid Great Basin and Mojave deserts in the United States. The park protects the northwest corner of the Mojave Desert and contains a diverse desert environment of salt-flats, sand dunes, badlands, valleys, canyons, and mountains. It is the largest national park in the lower 48 states and has been declared an International Biosphere Reserve.

In this below-sea-level basin, steady drought and record summer heat make Death Valley a land of extremes. Yet, each extreme has a striking contrast. Towering peaks are frosted with winter snow. Rare rainstorms bring vast fields of wildflowers. Lush oases harbor tiny fish and refuge for wildlife and humans. Despite its morbid name, a great diversity of life survives in Death Valley

Things you can do at Death Valley National Park:

The main road transecting Death Valley National Park from east to west is California Highway 190.
On the east in Nevada, U.S. Route 95 parallels the park from north to south with connecting highways at Scotty’s Junction (State Route 267), Beatty (State Route 374), and Lathrop Wells (State Route 373).
The most direct route from Las Vegas (via Pahrump, NV) and other options are available by downloading Routes From Las Vegas.
Coming from the west, State Route 14 and U.S. Route 395 lead to Ridgecrest, CA where State Route 178 heads east into the park. Further north on Hwy 395 at Olancha, CA you can join Hwy 190 to the park, or north of that at Lone Pine, CA, Hwy 136 will also join Hwy 190 heading east into the park.
South of the park, Interstate 15 passes through Baker, California on its way from Los Angeles to Las Vegas. State Route 127 travels north from Baker to Shoshone and Death Valley Junction with connections to the park on State Route 178 from Shoshone and connection with California Highway 190 at Death Valley Junction.

Arches National Park is a US National Park in eastern Utah. The park is located on the Colorado River 4 miles (6 km) north of Moab, Utah. It is known for containing over 2,000 natural sandstone arches, including the world-famous Delicate Arch, in addition to a variety of unique geological resources and formations.

Things you can do at Arches National Park:

Shuttles & Taxis
Commercial van services and taxis operate between Grand Junction, Moab and other destinations.For additional information on transportation options in and around Moab, contact the Grand County Travel Council.

Everglades National Park is a U.S. National Park in Florida that protects the southern 20 percent of the original Everglades. In the United States, it is the largest tropical wilderness, the largest wilderness of any kind east of the Mississippi River, and is visited on average by one million people each year.

Things you can do at Everglades National Park:

Additionally, boaters and paddlers can enter the park through its coastal boundaries and waterways. Visitor Centers are located at the Main Entrance, Flamingo, Shark Valley and Gulf Coast.

Yellowstone National Park is a national park located primarily in the U.S. state of Wyoming, although it also extends into Montana and Idaho.
It’s a Wonderland. Old Faithful and the majority of the world’s geysers are preserved here. They are the main reason the park was established in 1872 as America’s first national park—an idea that spread worldwide. A mountain wildland, home to grizzly bears, wolves, and herds of bison and elk, the park is the core of one of the last, nearly intact, natural ecosystems in the Earth’s temperate zone.

Things you can do at Yellowstone National Park:

Shenandoah National Park encompasses part of the Blue Ridge Mountains in the U.S. state of Virginia.
Just 75 miles from the bustle of Washington, D.C., Shenandoah National Park is your escape to recreation and re-creation. Cascading waterfalls, spectacular vistas, quiet wooded hollows—take a hike, a meander along Skyline Drive, or a picnic with the family. 200,000 acres of protected lands are haven to deer, songbirds, the night sky.

Things you can do at Shenandoah National Park:

Shenandoah National Park is located in the Blue Ridge Mountains of Virginia just west of Washington, D.C. and stretches 105 miles from its northern entrance at Front Royal to its southern entrance near Waynesboro.

There are four entrances into Shenandoah National Park and numerous gateway communities that offer services. The park’s four entrances are located at:

Bryce Canyon National Park is a National Park located in southwestern Utah in the United States. The major feature of the park is Bryce Canyon, which despite its name, is not a canyon, but a collection of giant natural amphitheaters along the eastern side of the Paunsaugunt Plateau.

There is no place quite like Bryce Canyon. Hoodoos (odd-shaped pillars of rock left standing from the forces of erosion) can be found on every continent, but here is the archetypal “hoodoo-iferous” terrain.

Things you can do at Bryce Canyon National Park:

Two distinct desert ecosystems, the Mojave and the Colorado, come together in Joshua Tree National Park. A fascinating variety of plants and animals make their homes in a land sculpted by strong winds and occasional torrents of rain. Dark night skies, a rich cultural history, and surreal geologic features add to the wonder of this vast wilderness in southern California.

Things you can do at Joshua Tree National Park:

Joshua Tree National Park lies within a few hours’ drive of several major metropolitan areas. The park is located about:
140 miles east of Los Angeles,
175 miles northeast of San Diego,
215 miles southwest of Las Vegas, Nevada, and
222 miles west of Phoenix, Arizona.
Do not rely on GPS directions to navigate to or within Joshua Tree National Park! Vehicle navigation systems sometimes try to route you onto backcountry roads with ruts or soft sand that may be impassable to your vehicle.

You can approach Joshua Tree from Interstate 10 or California Highway 62 (the Twentynine Palms Highway).

The closest airport is in Palm Springs.

There is no public transportation to the park.

Detailed directions on how to get to all of the Parks mentioned: http://www.nps.gov/index.htm